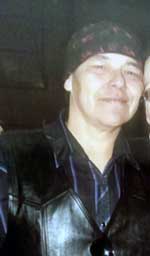 He was born on December 12, 1962 in Yankton, South Dakota the son of Roger Newton and Ruth (Cloud) Campbell.

Iver was raised in the Waubay area and went to school in Waubay. He received his GED from SWC. Iver went to SWC for plumbing.

He also worked with masonry with his uncle.

Iver married Susan Peters and they moved to California for three years. They had six children together and moved back to the Waubay area.

He worked for The ESDS, The Dakota Sioux Casino, Oak Valley and doing various construction jobs.

Iver was a janitor at the Enemy Swim Day School.
He enjoyed playing pool, baseball, softball, The Minnesota Vikings, listening to music and visiting family & friends.

He always liked to joke around with everyone! Iver was very outgoing and was a ray of Sunshine!