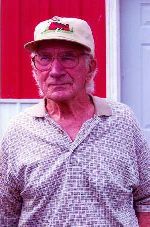 Isadore S. Helmbrecht, age 86, of Hollywood Township passed away on Monday, May 14, 2012 at his residence.

He was born on December 31, 1925 in Mora, Minnesota the son of Ludwig & Theresa Leminger Helmbrecht. Isadore was the second youngest of fifteen children.

Isadore honorably served his Country in The United States Army.

On May 20th, 1952, Isadore S. Helmbrecht and Irene T. Kieser were joined in holy marriage at Holy Trinity Catholic Church in Winsted.

Isadore and his wife Irene engaged in dairy farming for many years.

He enjoyed fishing, gardening, playing cards, farming where he has lived for over fifty years.

He was a member of Holy Trinity Catholic Church in Winsted.

Preceded in death by his wife: Irene T. Helmbrecht on August 2, 2001, a son: Roger Helmbrecht and by brothers and sisters.

A Mass of Christian Burial for Isadore Helmbrecht will be held on Friday, May 18th, at 1:00 P.M. at Holy Trinity Catholic Church in Winsted. Father Tony Hesse will be the Celebrant.

A visitation will be held on Thursday, May 17th from 6-8 P.M. at The Chilson Funeral Home in Winsted.