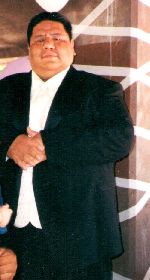 Isaac Wright, age 40 of White Bear Lake Journeyed to the Spirit World on Monday, August 25, 2014 at Woodwind Hospital in Woodbury.

He was born on January 21, 1974 in Minneapolis the son of Isaac Kingbird and Brenda Wright.
Isaac was a counselor at a homeless shelter for Catholic Charity.

He enjoyed fishing with his “Pooh Bear” Tammie Head at Leech Lake. Isaac was a hard worker! He loved his nieces and nephews! He was a protector of his family and friends. Isaac was a problem solver. He was saved at Straight Gate Church in 1988. He played as hard as he worked. He liked rap music. Isaac was the best big brother we could have. He was a mentor to everybody he met. They called him “Zeke”.

Funeral services for Isaac Wright will be held on Friday, August 29th, 2014 at 1:00 P.M. at Onigum Community Center in Onigum, Minnesota. Interment will follow at Onigum Catholic Cemetery in Walker, Minnesota.