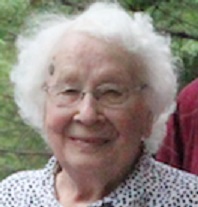 Irma, the daughter of Edward and Mamie (Leaf) Lenz, was born in Montrose, Wright County, Minnesota on August 15, 1920.

She was born again to be God’s own child by the “washing of water and the Word” in Holy Baptism October 3, 1920, administered by the Rev. E.H. Bruns at St. Paul’s Evangelical Lutheran Church in Montrose, Minnesota.

Irma was instructed in the Lutheran catechism and affirmed the vows made at her baptism in the rite of confirmation on August 5, 1934 at St. Paul’s Evangelical Lutheran Church in Montrose, Minnesota with the Rev. Alvin Leersen as officiant. Her confirmation memory verse was John 8:31-32, “So Jesus said to the Jews who had believed him, “If you abide in my word, you are truly my disciples, and you will know the truth, and the truth will set you free.”’

On Nov. 8, 1941,  Irma was joined in holy matrimony to Arthur G. Jaekel at the parsonage of St. Paul’s Evangelical Lutheran Church, Montrose. The Rev. Ferdinand Weyland officiated at the wedding ceremony. Their marriage was blessed with a son, James.

Before her move to New York in 1999, Irma was a long time member of St. Peter Lutheran Church, Watertown Township, Carver Co.  She served her Lord and the church in many capacities including being a member and president of the Lutheran Women’s Missionary League, Adult choir member, Sunday School Teacher and Superintendent.  After moving to New York she was an active member of the Lutheran Women’s Missionary League and Wednesday morning bible class at St. Paul’s  Evangelical Lutheran Church, Saratoga Springs, NY

She is survived by her son, the Rev. James A. (Janice) Jaekel of Saratoga Springs, N.Y.; grandchildren, Jennifer (Jaekel) Scheffel and her husband David Scheffel, and Jonathan “Jon” Jaekel and his wife Ai Chi (Huang) Jaekel; five great-grandchildren, Ella, Grace, Jack, Caroline and Jane Scheffel; nieces, nephews, other relatives and many friends.

Funeral Services are canceled at this time.   A Memorial Service will be held at a later date.