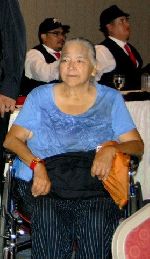 Iris Elaine Lussier whose Indian name is Soaring Eagle Woman, Bebaamaash-Giniwikwe passed on to the Spirit World on Monday, August 19th, 2013 at Jordain-Perpich Nursing Home in Red Lake, MN surrounded by her family and friends.

Iris was born on September 1st, 1951 to A. Thomas and Verna (Defoe) Lussier in Red Lake, MN. After graduating high school in 1969, Iris went to nursing school in Alburquerque, New Mexico where she received her degree as a Licensed Practical Nurse. She dedicated her life to nursing until she retired in 2007 due to health problems. She enjoyed playing at the casino, spending time with her family, watching all her grandchildren play, and staying up late watching her favorite TV shows CSI and Law & Order. She was a wonderful, loving, caring woman with a great sense of humor. She enjoyed joking with family and friends and making people laugh. Iris will always hold a special place in the hearts of those that knew her.

A wake for Iris will be held on Wednesday, August 21st, 2013 at the Little Rock Center beginning at 6pm and will continue until the day of services which will begin at 1 PM on Friday, August 23, 2013 at St. Mary’s Catholic Church in Red Lake, MN.