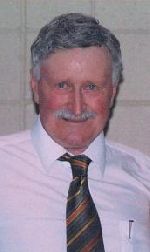 He was born in Winsted Township, McLeod County the son of Hubert & Eleanore
(LaMott) Haekenkamp.

Hubert honorably served his Country in The United States Army.

On June 6, 1959, Hubert H. Haekenkamp and Judith A. Peterson were joined in holy marriage at St. Anastasia Catholic Church in
Hutchinson. God blessed their marriage with five children.

Hubert was a lifelong farmer in Winsted Township, McLeod County giving his life to the farm that was in the family for generations. He was a strong, proud family man.

He was a faithful member of Holy Trinity Catholic Church in Winsted and of The Knights of Columbus Council # 8253. Hubert also belonged to The
Silver Lake American Legion Post # 141. He was a long time member of the NRA and was a proud American with strong political beliefs.

A Mass of Christian Burial for Hubert Haekenkamp will be held on Monday, July 8, 2013 at 11:00 A.M. at Holy Trinity Catholic Church in Winsted. Father Paul Schumacher will be the Celebrant. Interment with military rites will follow at Holy Trinity Cemetery.

Further visitation will be held on Monday morning, July 8th at the funeral home one hour prior to Mass.