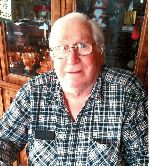 He was born on March 22, 1930 in New Germany the son of Adolph and Johanna (Speigner) Vollrath.

He formerly worked as a painter at Millerbernd Manufacturing for thirty- four years.

Preceded in death by his parents, a sister and by four brothers.

A Memorial service for Howard Vollrath will be held on Saturday, December 29th at 4:00 P.M at The Chilson Funeral Home in Winsted. Pastor Dave Hormann will officiate.

A visitation will be held on Saturday, December 29th at the funeral home from 1:00 P.M. until time of services.