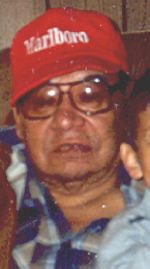 He was born in Sisseton on August 26, 1932 the son of Solomon & Julia Pahn Derby. As a young man he attended the Pipestone Indian School. He enjoyed driving his car, watching movies, visiting with people, especially with his son Howard.

Funeral services for Howard Derby will be held on Tuesday, January 15th at 2:00 P.M. at The Community Center in Agency Village, South Dakota.

at The Community Center in Agency Village, South Dakota.