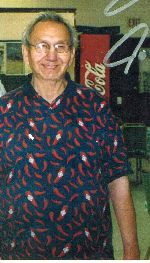 Henry James Shepherd, age 71, of Sisseton, South Dakota he passed on to be with the Lord on Tuesday, February 11, 2014 at St. Luke’s Hospital in Aberdeen, South Dakota.

He was born on April 2, 1942 in Sisseton, South Dakota the son of Ishmael and Viola (Owen) Shepherd.

Henry lived and worked in Watertown, South Dakota for several years. While there, he was able to take a vacation to Hawaii which he loved to talk about. He moved back to Agency Village where he worked for the Sisseton-Wahpeton Oyate Elderly Nutrition Center. While there, he had his picture taken with Senator Tim Johnson, which we all treasure. Henry also had an ATV that he rode in the Fall Parade. It was his prize possession!

Survived by sisters: Cindy Shepherd and Brenda (Shepherd) Grey of Waubay and Karen (Shepherd) Renville of Sisseton, as well as numerous cousins, nieces, nephews and grandchildren. Henry was never married, but he was Grandpa Henry to all of them.

Preceded in death by his parents by his parents: Reverend Ishmael and Viola (Owen) Shepherd, a sister: Zelda (Shepherd) Betoney, a brother: Jerry Shepherd and by a niece: Candace Grey.

Special music by True Life Ministries and Hildy Rodlund.
An all night wake will be held on Friday, February 14th beginning at 7:00 P.M. at Eagle’s Wing Baptist Church in Sisseton, South Dakota.

Honorary Casket Bearers will be all family and friends.