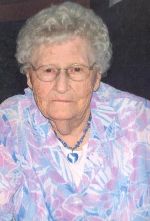 She was born on March 25, 1917 in Middleville Township, Wright County the daughter of Joseph & Louise Hollerbach Kieser.

She was a life long resident of Winsted and a faithful member of Holy Trinity Catholic Church.

A Mass of Christian Burial for Helen Habisch will be held on Wednesday, April 10th at 11:00 A.M. at Holy Trinity Catholic Church in Winsted. Father Tony Stubeda will be the Celebrant.