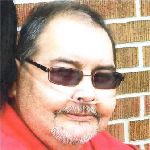 Harold Graves Sr. “Z-man” was born July 21st 1953 to Grace (Rosebear) Graves & Walter Graves Sr. He passed into the Spirit World on Sunday, December 15th 2013.
Z-man was born in Red Lake, Minnesota where he was raised & grew up in the Ponemah & Redby communities.
Z-man graduated from Red Lake High school and moved onto Lawrence, Kansas where he attended Haskell Indian College for a short time. He then moved back to Minnesota where he studied art at Macalester College while he was working fulltime at the American Indian Center in the art department in Minneapolis. Z-man then moved onto Dunwoody College where he graduated.
In January 1976, he married Wanda Graves and together they had five children. Z-man also had two children prior to his marriage and including five special children to him: John (Kathleen) Graves, Debbie (Justin) Graves, Star (Kendall) Kingbird, Harold (Marissa) Graves Jr., Kenneth Graves, Michael Strong, Marilee Strong, Alexandra Dow, Edward Lone, Trina Lone, Angela Strong & Apryl Lattergrass; Z-man had twenty eight grandchildren & seven great grandchildren.
Z-man’s hobbies and interests were watching news, crime shows, wrestling and movies. He loved spending time with his family, visiting with friends and having a house full of grandchildren, he never minded the noise, to him it was a blessing to be able to still be here with them.
When Z-man was younger his interests were basketball. He played for a Native American traveling team for several years where he met several acquauintances that he stayed close to throughout his years. He also loved it when his children and grandchildren starting playing sports and he would go and watch them play.
Z-mans work career consisted of working at the American Indian Center in the art department., a foundry worker for FMC with his father in law, a Maintenance worker for Red Lake Housing, Carpenter for Red Lake Industries, Commisioner for Red Lake Gaming & a Police officer for BIA in Red Lake & then switched to Red Lake Tribal Police, which he was very honored & proud to up hold the law and help the people of the Red Lake reservation at the same time.
Z-man’s last words to his family & friends would have been that he would want everyone to know it’s okay to grieve for him but move on, although your sad, put on a smile & keep your head up & everyone including his family to be strong and support each other through this difficult time, he would want you all to know he loves you all very much and also know how much you loved him and take care of his dog “Harry”.
All night wakes for Harold “Z-man” Graves Sr. will start @3:00 P.M. Tuesday, December 17th 2013 at The Redby Community Center. The family will be escorting Z-man from Hwy 89 (reservation line) Tuesday, December 17th at 1:00 P.M. to The Redby Community Center.
Funeral services will be held at 10:00 A.M. on Thursday, December 19th, 2013, funeral procession will be a full police escort to his residence in shemahgun where he will be laid to rest next to his faithful partner K9 officer “King”.