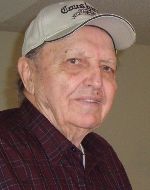 Harold graduated from Holy Trinity High School and attended classes at the Dunwoody Institute in Minneapolis.

He was drafted into the United States Army during World War II, trained as a radio operator and served with honor in both Europe and the Pacific.

Harold then returned to Winsted and was a partner with his brother Art in the Guggemos Brothers Decorators.

Harold also donated his talents to many projects at Holy Trinity church, schools, rectory, and convent as a painter, carpenter and carpet and tile layer.

Harold also had a 24-year career as a Rural Mail Carrier for the United States Postal Service. After retiring, Harold pursued his passion for building O Gauge model trains, a pursuit in which he garnered the title of “Master Builder”.

Harold was preceded in death by his parents, Charles and Ruth, his brothers Kenneth and Don, daughter in-law Dawn Guggemos (Landin) and grandchild Mark Thomas Aune.

A Mass of Christian Burial for Harold Guggemos will be held on Monday, November 18, 2019 at 11:00 A.M. at Holy Trinity Catholic Church in Winsted. Father Michael Doyle will be the Celebrant.
Interment with military rites Holy Trinity Cemetery.