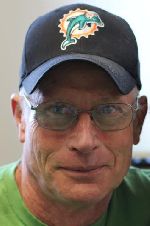 Harlen was born in Glencoe on November 12th, 1947 becoming the son of Leonard and Irene (Schultz) Kegler.

He attended Holy Trinity Elementary and graduated from Lester Prairie High School in 1965.

On August 1st, 1991, Gayle Elaine Shawn and Harlen were joined in holy marriage at Bloomington Lutheran Church in Bloomington, MN. Their marriage brought together a family with three children, Kimberly, Brian and Travis. Harlen served in the Army Reserves for 7 years as an Infantryman and was proud of his service to this country.

Harlen was a talented carpenter and woodworker for his entire career. He was a carpenter both for Littfin Lumber and as an independent business owner. Harlen was known as a gentle and caring man with a good sense of humor. He was incredibly talented and generously shared his carpentry skills. He participated in Knights of Columbus organization for many years.

A Mass of Christian Burial for Harlen Kegler will be held on Wednesday, September 28th at 10:30 A.M. at Holy Trinity Catholic Church in Winsted. Father Paul Schumacher will be the Celebrant. Interment with military rites will follow at Holy Trinity Cemetery.