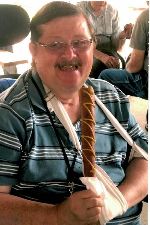 He served his Country in The United States Army in Vietnam and was honorably discharged on March 21st, 1972.

Harlan was employed at Sterner Lighting in Winsted as a draftsman and in sales for more than twenty years. He later worked at Uni-Hydro in Cosmos.

Survived by brothers: Darryl W. Kieser (fiancé Sherry Paschke) and Todd A. Kieser all of Winsted; other relatives and many friends.

Funeral services for Harlan Kieser will be held on Monday, August 21st at 1:00 P.M. at St. John’s Evangelical Lutheran Church in Winsted. Pastor David Hormann will officiate. Sheryl Menden will be the organist for the funeral service

Interment will follow with military rites at the Winsted Public Cemetery.