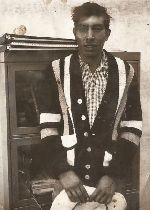 Guy Solomon St. John 67 made his journey to the spirit world on April 11th, 2013 at Avera Hospital in Pierre, South Dakota.

On April 6th 1966 he married Glenda Chapman, from this marriage they became proud parents of 2 children. He later had 6 more children in his second marriage to Linda Many Horses.

In his younger years he played softball and enjoyed watching his kids and grandkids play softball as well. He enjoyed teaching his grandkids how to play horseshoes, whist, softball, how to drive, he enjoyed summer time the best where he loved being outdoors whether it was attending a pow wow, watching a rodeo, going to softball games or just hanging out laughing and joking, listening to music but whatever it was he doing it was all about his kids, grandkids and great grandkids.

He was a long time farmer and ranch hand. He worked and supported his family by working for various farmers around the Big Bend area.