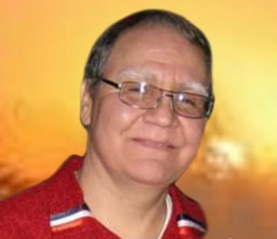 Guy James Fairbanks, 59, St. Paul, MN, passed away Sunday, June 28, 2020 at the University of Minnesota Fairview Hospital in Minneapolis. Guy was born in Minneapolis on August 1, 1960 to his parents Herman and Nancy Fairbanks. He lived the majority of his life in Minneapolis with part of his childhood in California, Ohio, Wisconsin and Iowa and lived in Cass Lake for 8 eight years in his early adulthood. Guy returned to Minneapolis and attended college at the U of MN for 3 years majoring in Business. Guy married Barbara Dudley on June 9, 2001 and they made their home in St. Paul. He worked at various jobs in the cities doing Building Maintenance and was currently a Van Driver for Treasured Transportation.

Guy loved going to Powwows, spending time with family and relatives, watching the MN Twins, Vikings, and the Wild and he loved harvesting wild rice. His pastimes were Bingo, Keno, Sudoku, Cribbage and watching the History Channel and PBS on TV. Guy loved animals especially a special cat named Kitty.

Visitation and Remembrances for Guy Fairbanks will be held at All Saints Episcopal Mission Church, 3044 Longfellow Ave., Minneapolis MN  on Thursday, July 2nd from 1:00 P.M. – 8:00 P.M.  Due to the Co-vid 19 and social distancing the visitation will be for relatives and close friends only.