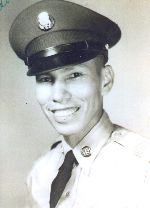 He was born on August 29, 1938 in Sisseton, South Dakota, the son of Howard and Josephine (Bigtalk) Redday.

Gordon proudly served in the United States Army, entering on August 18, 1961 and was honorably discharged on May 26, 1964 achieving the rank of Corporal. During his time in the Army, he studied artillery and was stationed at Fort Richardson, Alaska. He was a U.S. Army Artillery Vietnam Era Veteran. Gordon enjoyed his time serving his country and enjoyed telling his family and friends his memories.

Gordon was a member of the EMTMVO for IHS for many years, active member and past Vice Commander of the American Legion Post 314, Native American Veterans Association, and was an ordained elder at Goodwill Indian Presbyterian Church.

Gordon enjoyed attending Powwows and seeing his friends, driving around, riding motorcycles, and telling stories. He was a talented self-taught artist who knew the story and meaning behind everything he saw or made. He was also a knowledgeable teacher who helped others assisted with the Sisseton Wahpeton Dakota Language Dictionary. Gordon had a great sense of humor and could find joy in any situation.

A Wake will be held on Saturday, July 14th beginning at 7:00 P.M. at The Sisseton Wahpeton Oyate Community Center in Old Agency Village, South Dakota.

An all night wake will be held Sunday, July 15, 2018 beginning at 7:00 PM at the Sisseton Wahpeton Oyate Community Center in Old Agency Village, South Dakota.