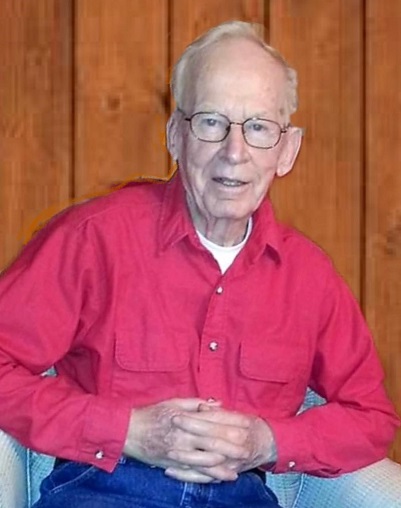 Glen Magnus Jorgensen of Waverly, MN, passed away peacefully on Tuesday morning, February 16, 2021, at the age of 93.

Glen was born in Oster, Woodland Township, Wright County on October 22, 1927 to Magnus and Alice (Lindgren) Jorgensen. He was baptized and confirmed at Nylunda Lutheran Church, Lake Mary.

As a first generation American, born to a Danish immigrant father, Glen took great pride in his Scandinavian heritage and passed on endless family history and stories from his childhood. He often shared with people that he was born and raised in the house in which he lived for his entire life and “never moved off the spot”.

Glen began his career at Millerbernd Manufacturing Company in 1947 as one of six employees and retired in 1990. He was proud of his 43 years with the company and continued to follow their ongoing success and accomplishments throughout his retirement.

At the age of 18, Glen drove his Model A Ford across the country to California and back. He became a licensed private pilot at the age of 18 and enjoyed flying as a pastime for decades. At the age of 19, Glen piloted a Taylorcraft BC-12-D, a single engine plane, to California for a west coast adventure with a friend. As an avid outdoorsman and conservationist, he passed his worldly knowledge and love of the great outdoors to his sons-in-law and grandsons, who were his pride and joy.

During their retirement, Glen and Diane enjoyed their remote little cabin near Canada, snowmobiling trips, airshows, ice fishing and a few winter getaways on Sanibel Island, FL. Glen was a brilliant man who will be greatly missed by all who knew him!

Funeral Services for Glen Jorgensen will be held on Sunday, February 21, 2021 at 2:00 P.M. at The Chilson Funeral Home in Winsted.   Pastor Jeffrey M. Engholm will officiate.   Interment will follow at Nylunda Swedish Lutheran Cemetery.

A visitation will be held on Sunday, February 21st from 12 Noon until time of services at the funeral home.