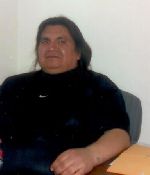 He was born on June 3, 1961 in Bagley, Minnesota the son of Gerald & Elsie Jourdain Jackson.

He enjoyed fishing, listening to Country Western music, working on cars, the out of doors, motorcycles and was good at crafting.

Preceded in death by a daughter: Charleen, his mother: Elsie Jackson, a brother: Gondi, and grandparents: George & Beatrice Jackson.

Funeral services for Gerald Marvin “Tiny” Jackson will be held on Wednesday, June 15th at 12 Noon at The Rice Lake Community Center on The White Earth Reservation.

All night wakes will be held on Monday, June 13 at All Saints Episcopal Church, 31st & Longfellow in Minneapolis and Tuesday, June 14th at The Rice Lake Community Center. Both wakes begin at 5:00 P.M.

Chilson Funeral Home, Winsted, MN is proud to have served the family.