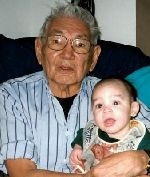 Gerald Marvin Jackson entered this life on March 31, 1930 to George Edward Jackson and Beatrice Iron in White Earth, Minnesota. He left this world and began his journey home on January 2nd 2020 in Minneapolis, Minnesota. He married Elsie Marie Jourdain and together they had 6 children.

An all-night visitation will be held on Monday, January 6th, 2020 beginning at 5:00 PM at the Little Earth Gym in Minneapolis, Minnesota.

A funeral service will be held on Wednesday, January 8th, 2020 at 10:00 AM at St. Phillips Episcopal Church, in Rice Lake, Minnesota.

Interment will be at the St. Phillips Cemetery in Rice Lake, Minnesota

Arrangements were made with The Chilson Funeral Home in Winsted, Minnesota.

On-line condolences can be made to www.thechilsonfuneralhome.com