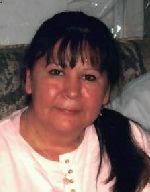 She was born on October 22nd, 1955 in Sisseton, South Dakota the daughter of George Robertson and Dormalie Owen.

Georgia attended school in Wilmot, South Dakota and graduated in 1986 from SWCC with a degree in early childhood.

She worked at The Wahpeton Indian School as a night monitor, then she handed out car seats for Healthy Start which led to her assisting in starting the Early Childhood Intervention Program.

She loved gardening, reading, beading, arts and crafts, her culture and her pets. Georgia was a herbalist. She was passionate about her homeless animals and was an animal foster parent. She loved and cared for her family, especially her grandchildren.

She will be dearly missed by all of her family and friends.

Preceded in death by her parents George and Dormalie Robertson, two sisters Cleone Provost and Helen Godfrey and by her grandparents.

Funeral services will be held on Friday, November 23rd at 1:00 P.M. at The Sisseton-Wahpeton Community Center in Old Agency Village, South Dakota.

Drum Group will be “Agency Singers”.