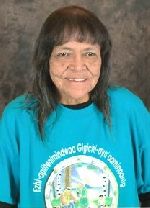 Georgette Marie Robertson, age 68 of Bemidji, Minnesota journeyed to the Spirit World on Sunday, November, 11, 2018 at Sanford Health in Fargo, North Dakota. She was born on September 13th, 1950 in Minneapolis, Minnesota. The Daughter of George Oliver and Eliza Dudley. Raised in North Minneapolis, she attended North High School. Georgette married Frank Robertson and became a full time stay at home mom. She loved her daughter and grandchildren and great-grandchildren dearly. She was a caregiver and helped many people, opening her home if you needed a place to stay for the night. Georgette enjoyed going to the casino and watching her cowboys.

Burial will be at Hillside Cemetery in Minneapolis, Minnesota.