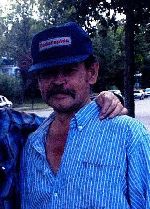 George Adolph King Jr., age 56 of Virginia, Minnesota Journeyed to the Spirit World on Friday, August 17, 2012 at his residence.

He was born on December 4, 1955 in Red Lake, Minnesota the son of George King Sr. and Mary Northrup King.

George was certified as a carpenter and welder.

He loved his dog “Sami” and taking her for walks, listening to music and spending time with family and friends. He loved to cook. He also liked going to casinos and playing the lottery.

An all night wake will be held on Tuesday, August 21st beginning at 11:00 A.M. at The Red Lake Community Center with a prayer service at 7:00 P.M.