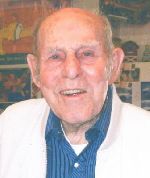 George Fredrick Forcier, age 93, of rural Winsted passed away on Wednesday, March 27, 2013 at his residence.

He was born on March 22, 1920 in rural Stewart, Minnesota, Renville County the son of Andrew & Minnie Krebsbach Forcier.

He honorably served his Country in United States Army during World War II.

On November 26, 1946, George Forcier and Evelyn Vokal were joined in holy marriage at St. Anastasia Catholic Church in Hutchinson.

He enjoyed wood crafting and helping his son John on the farm after he retired.

He was a member of Holy Trinity Catholic Church in Winsted.

Preceded in death by a son: Walter “Butch” Forcier in 1968, an infant son: John Bruce Forcier in 1956 and nine brothers and sisters.

A Mass of Christian Burial for George Forcier will be held on Monday, April 1, 2013 at 11:00 A.M. at Holy Trinity Catholic Church in Winsted.

A visitation will be held on Monday, April 1st from 9:00 A.M. until time of Mass at the church.