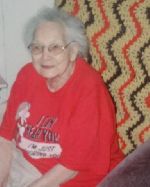 She was born on August 25, 1912, in Wilmot, SD, the daughter of Fred Pearsall and Eunice Amos.

In 1935, Genevieve Pearsall and Walter LaBatte were joined in marriage.

She was a homemaker, and also served as a Community Health Representative for the USC.

She was a life-long member of Pejuhutazizi Presbyterian Church of the Upper Sioux Community. Genevieve also belonged to its Ladies Aid.

She was one of nine remaining Dakota language speakers in Minnesota. Genevieve was also a living historian. She enjoyed singing from her Dakota Odowan, even up to her final days.

Genevieve also enjoyed sewing, crocheting, baking of bread, gardening, collecting chickens and visiting. Genevieve raised not only her own children, but many of her grandchildren, and her home was always open.

Honorary Casket Bearers were grandchildren, great-grandchildren and all of her relatives and friends.