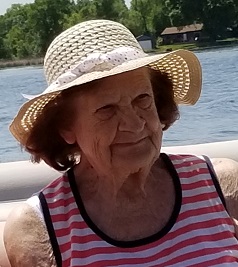 Geneva Lucille Dressler, age 92, passed away Wednesday, April 29, 2020 surrounded by her family’s love and is now reunited with her husband Delbert.

Geneva was born the daughter of Arthur and Ethel (Shrode) Foust on April 1, 1928 in her home in Bergen Township, Minnesota.  Geneva was baptized July 29, 1928 at Methodist Episcopal Church in Rockford, Minnesota.

She was united in marriage to Delbert Dressler on October 25, 1947 at the Methodist Church in Lester Prairie by the Rev. Norman Batdorf.

Geneva worked for many years at Tonka Toys in Mound and later at the Alice Haney Nursing Homes in Lester Prairie.

Geneva was a precious gift to all especially her 5 children, 12 grandchildren and 13 great-grandchildren.  Family was her greatest joy.  She loved fishing with family at their cabin on Lake Osakis and more recently at Lonnie and Bea’s cabin on Maple Lake.  She could spend hours fishing off the dock or riding on the Pontoon.  She also enjoyed going to the casino and would take her grandchildren and even great-grandchild to the casino for their 18th birthdays.  She would sew and fix anything that needed mending.  She also enjoyed going to Bingo, embroidering, putting together puzzles and going out to eat with family and friends.  Her family will miss her famous apple bars, deviled eggs, potato salad, chicken salad and lime pickles.

She was preceded in death by her loving husband, Delbert; parents; mother and father in law, Henry and Elma Dressler; sisters and brothers in law: Harold and Rose Dressler, Evelyn and Merlin Kassulker, Lorraine and Norman Kassulker.