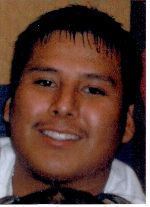 He was born on February 14th, 1984 to Gaylord Gill Sr. and Rita Wilson in Sisseton, South Dakota.

He loved music, as he was a recording native rapper. Gage also loved listening to stories told by his elders. Gage loved his family and friends. He brought encouragement and laughter to those he encountered. He respected both his Christian and Traditional ways, which were reflected in his music.

Preceded in death by his father: Gaylord Gill Sr.

Funeral services for Gaylord “Gage” Gill Jr. will be held on Friday, July 22nd at 10:00 A.M. at The Community Center in Old Agency Village, South Dakota.

All night wakes will be held on Wednesday, July 20th and Thursday, July 21st beginning at 7:00 P.M. at The Community Center in Old Agency Village, South Dakota.