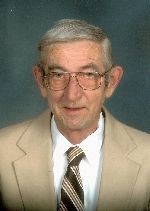 Franklin George Roufs, age 77, of Winsted, MN passed away peacefully, in his home of cancer, on Wednesday, September 1, 2010, surrounded by family members.

Franklin was born on August 24th, 1933 in Winsted, MN, the son of George and Agnes (Fasching) Roufs.

Frank was united in marriage to Helen Claire Raeker on June 30th, 1956. They were married for 16 years and they were blessed with 7 children: Paul, Mary, Jane, Ann, Joan, Judi and Peter. In 1972, his wife Helen died of cancer at the age of 39.

On March 13th, 1976, Franklin was united in marriage to Theresa Marie Miller. Their marriage was blessed with 6 children: Jonathon, Molly, Claire, Anthony, Andrew and Jeanine.

Frank was a faithful, lifelong member of Holy Trinity Catholic Church. He served in the US Army in Korea, volunteered for 22 years as a fireman for the Winsted Fire Dept., and was a member of the American Legion in Winsted.

Frank is also fondly remembered for his work as the local milk man and worked 23 years at the ATHC in Winsted. He spent the last 8 years of his life working in his home, alongside his wife, caring for elderly in adult foster care.