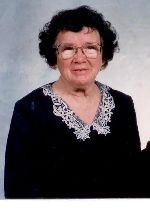 She was born on March 15, 1922 in St. Paul the daughter of Joseph & Johanna Mahoney Walsh.

She was formerly employed at Sterner’s Lighting in Accounts Payable from 1964 until 1985.
Fran later did volunteer work at the Rectory for Father Wyffels.

She was a faithful member of Holy Trinity Catholic Church and belonged to its C.C.W.

Preceded in death by her husband: William M. Neumann on December 25, 2008, her parents, a brother: Joseph, sisters:Mary, Mildred and Margaret “Etta”.

A Mass of Christian Burial for Frances “Fran” Neumann will be held on Wednesday, September 21st at 10:30 A.M. at Holy Trinity Catholic Church in Winsted. Father Tony Hesse will be the Celebrant. Interment will follow at Holy Trinity Cemetery.

Further visitation will be held on Wednesday, September 21st from 9-10 A.M. at The Chilson Funeral Home.