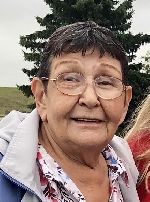 She was born on February 4, 1942, in Sisseton the daughter of Percy Kirk Sr. and Marcellaine Renville Kirk.

She was formerly employed at Head Start and later for twenty years at Maternal and Child Health for The Sisseton-Wahpeton Sioux Tribe.

Frances enjoyed playing bingo, cards, going to the Casino, playing slot machines and Walmart. She also enjoyed her grandchildren and her family.

She will be remembered for – She did it her way!

Funeral services for Frances Huff will be held on Friday, December 21, 2018 at 1:00 P.M. at St. Mary’s Episcopal Church in Old Agency Village, South Dakota. Officiating will be the Episcopal Lay Readers.

A wake will be held on Thursday, December 20th beginning at 7:00 P.M. at the Community Center in Old Agency Village.

Honorary Casket Bearers will be all her many relatives, MCH staff, friends Kathy Barse and Yvonne (Slick) Willey and High-Rise card playing crew