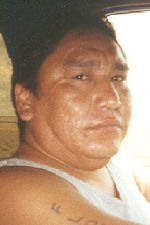 He was born in Sisseton, S.D. on February 8, 1960, the son of Roy and Marie Finley. Graduated from Sisseton High School in 1978. Floyd later attended a school for Christian Ministry in Arizona.

He belonged to The Ascension Presbyterian Church and was a former masonry worker.

Preceded in death by his parents: Roy and Marie Killsright Finley, a brother: Roy Finley Jr. and sisters: Louise “Hop”, Beatrice One Road and Edna Finley.

Interment at the Ascension Presbyterian Cemetery.

All night wakes were held on Monday, August 18th and Tuesday August 19th at the Guild Hall.