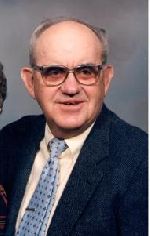 Felix Leo Juncewski, age 86, of Winsted passed away on Monday, January 7, 2013 at The Hutchinson Medical Center.

He was born on was born on March 8, 1926 in Silver Lake the son of Steven & Irene Bugner Juncewski.

He was confirmed at St. Adalbert’s Catholic Church in Silver Lake.

On October 21, 1947, Felix L. Juncewski and Sophie M. Fiecke were joined in holy marriage. God blessed their marriage with three sons.
They lived and farmed in rural Silver Lake. He also had a trucking business and a sod business.

They moved and semi retired in their new home in Winsted in 1990. From there he continued to drive truck and worked with his boys.

He was a faithful member of Holy Trinity Catholic Church in Winsted.

A Concelebrated Mass of Christian Burial for Felix Juncewski will be held on Thursday, January 10, 2013 at 11:00 A.M. at Holy Trinity Catholic Church in Winsted. Father Paul Schumacher and Father Eugene Brown will be the Concelebrants.

Reader for the Mass was Daryl Kiefer. Gift bearers will be Lauri Shamla and Darlene Kiefer.