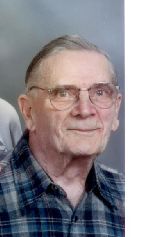 Felix Henry Bickman, age 93, of Lester Prairie passed away on Sunday, February 27th, 2011 at The Good Samaritan Center in Waconia.

He was born on December 18, 1917 in Victor Township, Wright County the son of Fran & Frances Zimmerman Bickman.

Mr. & Mrs. Bickman engaged in dairy farming near Lester Prairie for many years. Felix was also employed as a welder for over thirty years at Sterner Lighting.

He was a faithful member of Holy Trinity Catholic Church in Winsted. Felix also belonged to The American Legion Post # 407 in Winsted and the Knights of Columbus Council #

A Mass of Christian Burial for Felix Bickman will be held on Thursday, March 3rd at 11:30 A.M. at Holy Trinity Catholic Church in Winsted. Father Tony Hesse will be the Celebrant. Interment with military rites Holy Trinity Cemetery.

A visitation will be held on Thursday, March 3rd from 9 A.M. until 11:00 A.M. at The Chilson Funeral Home in Winsted.