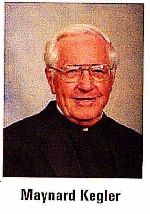 He was born on November 26, 1924 in Glencoe, Minnesota the son of Louis & Elizabeth (Artmann) Kegler.

Father Kegler attended St. Henry’s Seminary in Belleville, Illinois in September 1938 and graduated from there in 1944. He entered the Missionary Oblates of Mary Immaculate in Mission, Texas. Philosophy and Theology studies continued in Ottawa, Canada where he was ordained as a Priest on January 28, 1951.

After ordination Father Kegler taught at St. Henry’s Seminary in Belleville, Illinois for four years then Parish Ministry in Veblen and Orient, South Dakota followed by years of preaching ministry at The Kings House in Belleville, Illinois and Buffalo, Minnesota. He became Superior of The Preaching Board and for seventeen years was Director of The Kings House in Buffalo and eight years as Pastor of St. Francis Xavier Catholic Church in Buffalo. During his tenure as Pastor at St. Francis Xavier he oversaw the construction of the Resurrection Mausoleum in St. Francis Cemetery in Buffalo where he will be entombed. For a few years, while residing in Buffalo he served on the Board of Consulters of The St. Paul-Minneapolis Archdiocese as well as being a Dean and member of The Presbyteral Council of The Archdiocese. Father Kegler belonged to The Knights of Columbus Council 4th Degree # 2649.

He was preceded in death by his parents: Louis & Elizabeth Kegler, brothers and sisters-in-law: Sylvester (Lil) Kegler and Aloysuis (Mary) Kegler and by two brothers-in-law: Norbert Albers and Paul Greshowiak.

A Concelebrated Mass of Christian Burial for Father Maynard C. Kegler, OMI will be held on Monday, November 12, 2012 at 11:00 A.M. at St. Francis Xavier Catholic Church in Buffalo, Minnesota.

A visitation will be held on Sunday, November 11th from 4-8 P.M. at St. Francis Xavier Catholic Church in Buffalo, Minnesota