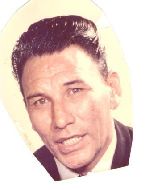 Fabian Charles “Bunky” Strong Sr., age 82, of Redby, Minnesota Passed into the Spirit World on Sunday, October 20, 2013 at The Red Lake Indian Hospital with his family and friends by his side.

He attended Marty Indian School in Marty, South Dakota and during his high school years he enlisted in the United States Air Force in 1947 and was honorably discharged in 1951. He served in the Korean War.

Bunky worked in Minneapolis, Minnesota as a welder, truck driver, and attended Globe Business College and earned his certificate in Accounting. He moved back to Red Lake, Minnesota in 1975 and was employed with Red Lake Comprehensive Health as an Accountant until he retired in 1991.

Bunky loved his children and grandchildren more than anything in this world. He’s the kind of man that was always so proud of them, and no matter of the situation he always stood by their side. He never gave up and never let go. He loved doing anything that involved his children. If it made them happy, then he was happy and always put them first.

A Funeral service for Fabian “Bunky” Strong Sr. will be held on Thursday, October 24th at 1:00 P.M. at St. Mary’s Catholic Church in Red Lake. Father Jerry Rogers will officiate.