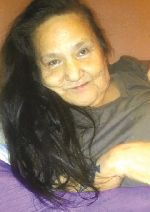 She was born on July 14, 1948 in Federal Dam, Minnesota the daughter of Vernon & Josephine Lee Sr.

As a child she spent her time with her grandparents Rachel & Guy Green on their farm in Princeton, Minnesota. She enjoyed spending time with her kids and grandkids. Everina was very humorous and could make everyone laugh. Everina was a mother to many, she did foster care from 1969-1998. Many children still consider her their mother/grandmother.

Drum Group will be “Hoka Hey”.

Honorary Casket Bearers all her grandchildren.