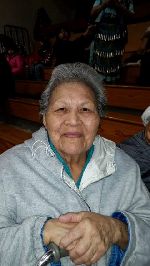 Evelyn N. (Coleman) Staples was born on February 7, 1933 in Naytahwaush, MN the daughter of Charley and Annie (Morgan) Coleman.

She spent some of her childhood in Naytahwaush, MN before she and her siblings became orphaned. She then grew up in the Pipestone Indian Boarding School and graduated from the Flandreau Indian Boarding School. She relocated to Chicago, IL for a brief time and returned to Minneapolis, MN. She married Leonard Staples on December 1, 1956 in Minneapolis, MN and together they raised their four children and a grandson, Donny.

Evelyn worked at Honeywell and as a housekeeper before becoming a full-time homemaker. Over the years she enjoyed going to rummage sales, thrift stores, bingo and casinos. She loved to sew, do daily crossword puzzles, watch “Dog – the Bounty Hunter” show and listen to Tim McGraw music. She also loved spending time with friends and family, joking and teasing. She had a great sense of humor and a heart of gold. She admired the red cardinal, her culture and the many friendships she made.

She is survived by her daughters Joanne Staples and Karen Staples both of Minneapolis; a son Mike Staples of Naytahwaush, MN; a brother Ronald (Thelma) Coleman of Mahnomen, MN; twelve grandchildren; twenty-two great-grandchildren; many other relatives and friends.

She is preceded in death by her parents; her husband; four brothers; a sister; a daughter Donna Staples; and a grandson Dean Louis Jr.

Funeral services for Evelyn Staples will be held on Friday, November 20, 2015 at Church of the Blessed Kateri, 3045 Park Avenue, Minneapolis, MN at 11:00 AM.

An all-night wake will be held on Thursday, November 19, 2015 at Church of the Blessed Kateri beginning at 5:00 PM. Rev. George Ross and Clifford Garbow will officiate. The drum group will be The Oquist Family Singers and Ojibwe Hymn Singers. A special tribute by Joanne, Deanne and Alicia.