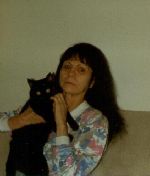 She was born on September 18, 1944 in Robbinsdale, MN the daughter of William and Rosamond (Vanderweist) Johnson.

Evelyn enjoyed watching wrestling on television. She loved animals, especially her cats and she enjoyed going to different zoos to look at the animals. In her younger years, she was known to “walk on the wild side.” As she got older, the wild side left her and she became a caregiver to everyone that she met.

She is survived by her daughter Kristine Smith, two grandchildren Janice and Violet, 4 great-grandchildren, her siblings Don (Julie) Johnson of Maple Plain, Larry (Jill) Johnson of Cambridge, Carol Johnson of Moundsview and Theresa Johnson of Winsted, many nieces and nephews, other relatives and friends.

She was preceded in death by her parents, her sister Dottie Fischer and her brother Richard Johnson.

Memorial service for Evelyn Johnson will be held on Saturday, December 8, 2012 at 12:00 Noon at Chilson Funeral Home, Winsted.

A visitation will be held from 10:00 A.M. until the time of services at the funeral home.