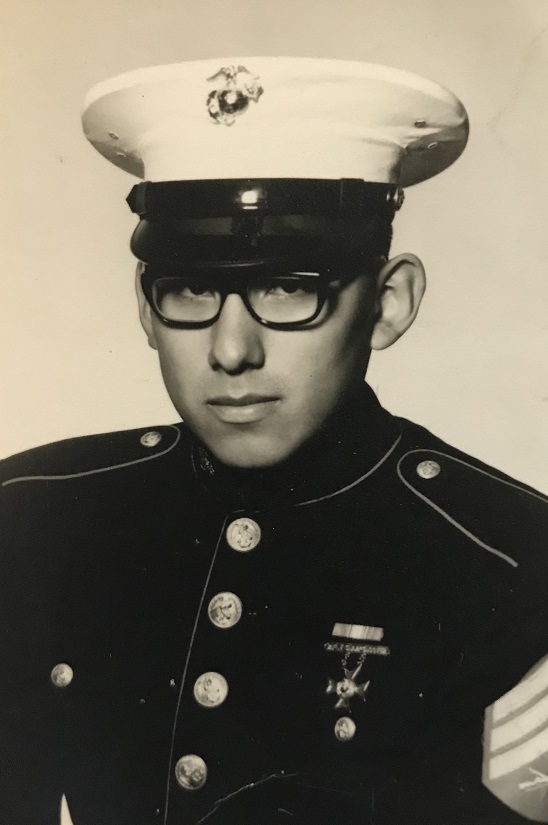 Eugene Jorgenson, age 70, of Columbia Heights went to Heaven on Monday, December 14, 2020 at Unity Mercy Hospital in Fridley, Minnesota.  He was born on August 2, 1950 in Red Lake, Minnesota the son of Nathan Whitefeather Jr. and Edwina Kipling. He was later adopted by Richard Jorgenson.

Eugene service in the United States Marines in 1969 and was discharged in 1972.  He was stationed in Okinawa, Japan, he reenlisted and stayed stateside as a drill Sargent on second tour of duty.  Eugene received both the National Defense Service and Good Conduct medals

He travelled frequently from Minneapolis, Minnesota and helped Willie & Anna Atkinson and family for over 20 years in house, church and tent meeting on reservations and small communities in The United States and Canada. Eugene attended Revival meeting in the 1960’s with Martha & Kenny Fortman and Maggie Jackson at the Anishinaabe Gospel Chapel (Old Guild Hall) in Redby, Minnesota. He played guitar and sang songs and hymns for Jesus, whom he loved and served all his Christian Life.

Eugene played guitar, joyfully sang Gospel songs, and Hymns. He worked with Red Lake Youth and formed the Red Lake Gospel Band with lead singer Joanie Maxwell and later, with her sister: Betty Lou and Johnny “Cash” Maxwell, on Bass, along with Oras, and Gilbert Lasley.

Eugene ministered in music and exhortation consistently, at The Redby PTL church, since it started, with Pastor George Jones and their first revival meetings in the 1980’s and later with Pastor Phillip Smith.  They travelled to Canada – Lake St. Martin Reservation and “The Canadians” Gordon & Betty Traverse came down to the states to minister. He ministered at the PTL Rock church with Pastor Josephine Smith, his Pastor, for over 13 years.

Eugene and his three children helped clear the land for the Willie Atkinson’s house to be moved from Big Fork, Minnesota. His mother, Edwina brought picnic lunches. Sally May came, prayed and encouraged everyone. Eugene was a blessing to the Atkinson family and to everyone else, as he had a ministry of Helps and Encouragement.

He was his “Brother” Willie’s right hand Tent Man, part of the team, for over 2 years, for First Nation Ministries from 1990 to 2014.  His last tent meeting that he helped put up, was at Mokahum Ministry Center, for the Cass Lake Alliance Church’s 75th Anniversary Celebration.

He worked as a carpenter for the Red Lake Builders along with Willie and John Atkinson for 3 to 5 years and at Ashley Furniture in Minneapolis, Mn for 10 years as a carpenter and various other jobs.

Eugene married the love of his life, Mary Waupekenay in 1988.  They met at the Central Indian Bible College and ministered at the College Choir Prison Ministry. They attended Gospel meeting in Montana, to help pay for his tuition.  They were married for 32 years.  Praise the Lord Jesus Christ.

His favorite songs that he like to sing were: I am a Pilgrim and a Stranger; Let Down your Nets, Way Down in the Water, There is a Blessing You Cannot Contain; This World is Not my home, I’m just a Passing Thru; There’s a Light in the Window; and Jesus on the Mainline, tell him what you want.

Eugene was an exceptional example for all to follow with his unwavering love for his God, his family, his country, and his Church community.  He served them all fully, faithfully, and unconditionally.  Eugene was a devoted follower of Jesus Christ and will be missed by many here on earth, but we can find peace knowing with full confidence that he is now at home with his Father God in Heaven.

A funeral service will be held on Thursday, December 31, 2020 at 11:00 A.M. at the Redby Community Center in Redby, Minnesota with burial to follow.

Pastor Josephine Smith will be the officiant.

Honorary Casket Bearers will be John Atkinson and all Eugene’s loving family and friends.

Interment will be held at the Redby Episcopal Church Cemetery in Redby, Minnesota.

The Chilson Funeral Home in Winsted, Minnesota is serving the family.  On – line condolences can be directed to www.chilsonfuneralhome.com