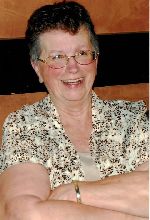 Stella was formerly employed as a nurse’s aide at Alice Haney Home in Lester Prairie and at Glencoe Long Term Care Center. She was a nurse at Burn’s Manor in Hutchinson.

She was a faithful member of Holy Trinity Catholic Church in Winsted and belonged to its C.C.W.

Stella enjoyed crocheting, watching the Twins and Vikings, playing computer games and cards, and fishing with her husband. She loved her grandchildren and great grandchildren!

Preceded in death by her husband Joseph “Joe” Fogarty, her parents, a brother Ronald Martin, a sister Theresa Nitchals and by a sister-in-law Alice Martin.

A Mass of Christian Burial for Estella Ann “Stella” Fogarty will be held on Wednesday, April 12th, 2017 at 10:00 A.M. at Holy Trinity Catholic Church in Winsted. Father Paul Schumacher will be the Celebrant.