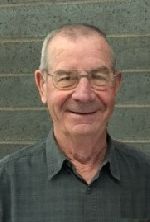 Emmett Joseph Hausladen, age 75, of Waverly passed away peacefully at his residence on Wednesday, January 17th.

He was born on April 5, 1942 on the family farm in Waverly, the son of Joseph and Hildegard (Remer) Hausladen. He was the seventh of fifteen children. Emmett was baptized and confirmed in his Catholic faith at St. Mary’s; he also received his education at St. Mary’s Catholic School, class of 1960.

He entered active military service in the Army on March 19, 1964, was stationed at Fort George G. Meade as a medic and received honorable discharge on March 18, 1966.

Emmett and Jane M. Bittner were joined in holy marriage on June 6, 1964 at St. Mary’s Catholic Church in Waverly. God blessed their marriage with three daughters. They made their home in Waverly and were blessed with 53 years of marriage.

Emmett was an equipment operator, working for Egan-McKay Electrical Contractors for 27 years and retiring in 2002. His passion was anything with mechanics – he owned and operated Emmett’s Mobil in Waverly for six years. He enjoyed finding old garden tractors and restoring them. He enjoyed travel -spending a portion of several winters in Arizona; going to Germany and to the cabin for 23 years. He enjoyed time spent fishing, camping, helping with farm work and being outdoors.

He was a man of deep faith and an active member of St. Mary’s Catholic Church his entire life; member of the Knights of Columbus, Legion, Assistant Chief and retired member the Waverly volunteer fire department. And above all, Emmett was proud of the legacy of his family.

Memorial Mass of Christian Burial for Emmett Hausladen will be Saturday, January 27, 2018 at 11 AM at St. Mary’s Catholic Church, Waverly. Fr. Kenneth O’Hotto will be the Celebrant. Inurnment at St. Mary’s Cemetery.

Urn Bearer will be Ken Hausladen.