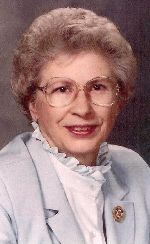 She was born in Scott County, Blakeley Township, Minnesota on March 17, 1925 the daughter of Emil & Johanna Malz Freter.

Elsie was employed many years as a nurses’ assistant both in Eagle Lake and in Madison Lake.

She was a life member of The V.F.W. Auxiliary.

Preceded in death by husband: Edward Juberian Sr., a son: Michael Juberian, a daughter-in-law: Shelly Juberian, her parents and by her brothers and sisters, infant Lawrence, Emil, Verdell, Emma, Adeline, Elsie and Sadie.

Funeral services for Elsie Guentzel will be held on Saturday, August 6th at 10:00 A.M. at The Chilson Funeral Home, 200 Fairlawn Avenue West, in Winsted, Minnesota. The Reverend Mark Loder will officiate.

A visitation will be held at the funeral home on Saturday morning, August 6th beginning at 8:00 A.M. until time of services.