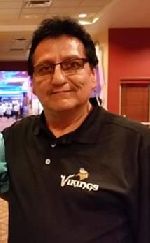 Further All Night Wake will be held on Thursday, December 5th beginning at 7:00 P.M. at Crow Agency Baptist Church in Crow Agency, Montana

He was born on July 28, 1956 in Crow Agency, Montana the son of Ellsworth Ten Bear and Darlene (Beaulieu) Ten Bear.

Ellsworth attended Flandreau Indian School. He was a member of the student government and a school rock band affectionately known as the Peanut Band. He also played football and wore jersey #81. He graduated with the class of 1975.

Ellsworth was employed in the bakery at Mystic Lake Casino.

Wake and graveside service will be held on Thursday, December 5th at the Crow Agency Baptist Church in Crow Agency, Montana. The time will be determined by the ability to travel from Minnesota. Gary Ten Bear and another family member will officiate.

Montana Casket Bearers will be his male relatives to be announced.

The Chilson Funeral Home in Winsted, Minnesota is serving the family in Minnesota. Online condolences may be made to www.chilsonfuneralhome.com

The Bullis Mortuary in Hardin, Montana is serving the family in Montana. Online condolences may be made to www.bullismortuary.com