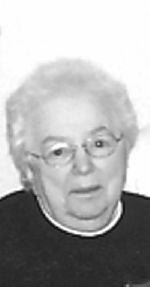 Elizabeth “Eliz” (Libor) Gueningsman, age 83, of Winsted, died Saturday, April 10, 2010, at the Good Samaritan Society of Howard Lake. Elizabeth was born June 24, 1926, in Delano, Wright County, to Peter and Mary Libor, one of 17 children born to this union. She married Joseph Gueningsman Aug. 21, 1946 at St. Peter’s Catholic Church in Delano, and the couple made their home in Winsted. God blessed their marriage with four children. Elizabeth worked at Edco Products in Winsted from 1960 until her retirement in 1994. She was a member of the Holy Trinity Council of Catholic Women, the Winsted American Legion Post 407 Auxiliary, and the VFW Auxiliary. She enjoyed spending time with her family, camping, fishing, sewing, canning, and playing cards.