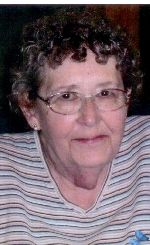 Eleanor Marcella “Ellie” Kegler, age 79, of Brooklyn Park and formerly of Winsted passed away at her home on Thursday, September 22nd, 2011.

She was born on June 29th, 1932 in Winsted the daughter of Hubert & Eleanore LaMott Haekenkamp.

On May 28, 1955, Eleanor Haekenkamp & Harold Kegler were joined in holy marriage at Holy Trinity Catholic Church in Winsted. God blessed their marriage with four daughters.

Eleanor was employed for many years as a head cook at Osseo School District #279.

A Mass of Christian Burial for Eleanor Kegler will be held at 11:00 A.M. Tuesday, September 27th at Holy Trinity Catholic Church in Winsted. Father Tony Hesse will be the Celebrant.

A visitation will be held on Monday, September 26th at The Chilson Funeral Home in Winsted from 4-8 P.M. A Parish Prayer service will be held at 7:00 P.M.