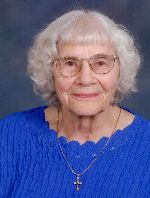 She was born on April 9, 1920 in Winsted the daughter of Alois “Al” & Louise Hemerick Remer.

Eleanor enjoyed flowers, birds, gardening, quilting and baking. Her family was the light of her life!

She was a faithful member of The Church of St. Mary in Waverly.

Preceded in death by her husband: Otto A. Birkholtz in 2004, a son: Cletus Birkholtz in 1972, daughters: Joanne Krecklau in 2007 and Bernice Wiegand in 2009, her parents, two brothers: Ronald & Raymond Remer and by two sisters: Marie Getz and Isabelle Lindenberg.

A Mass of Christian Burial for Eleanor Birkholtz will be held on Thursday, June 2nd at 10:30 A.M. at St. Mary’s Catholic Church in Waverly. Father Timothy Cloutier will be the Celebrant. Interment St. Timothy Cemetery in Maple Lake.