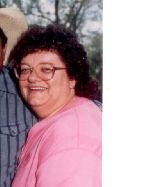 Elaine Noreen Robertson, age 58 of Peever, South Dakota was born to Emily and Erwin Koll Sr. on March 7, 1952 in Sisseton, South Dakota. She passed away on Monday, December 20th, 2010 in Sisseton.

Elaine graduated from South Shore High School in 1970. After graduation she attended Presentation College in Aberdeen, South Dakota graduating with an R.N. Degree in 1972. She worked at Prairie Lakes Hospital in Watertown, South Dakota for twenty years.

She was united in marriage to Bruce L. Robertson Sr. on July 12, 1991 in South Shore. To this union was born a son Blaine Owen Robertson. After her marriage she moved to the Sisseton area and worked as a Roberts County Community Health Nurse for fourteen years. She retired in 2006 due to health problems.

Elaine liked to cook, bake, sew and crochet until her health failed. She loved her pets, her cat Purr and dogs Skoosh and Rusty. Before her marriage she loved to travel and visited every state in the union except Alaska.

An all night wake service will be held on Wednesday, December 22nd (TODAY) at 7:00 P.M. at The Community Center in Old Agency Village, South Dakota.