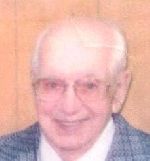 Edward Clemens Habisch, age 100, of Alexandria and formerly of Winsted passed away on Sunday, May 30th, 2010 at Knute-Nelson Nursing Home in Alexandria.

He was born in Winsted on October 13, 1909 the son of Frank & Elizabeth Laxen Habisch.

Through the years, he was employed at Foremost Dairies in Howard Lake and as a welder at both Sterners and Millerbernds.

He was a member of Holy Trinity Catholic Church in Winsted and a longtime member of The Winsted Fire Department.

A visitation was held on Friday, June 4th from 4-8 P.M. at The Chilson Funeral Home in Winsted. A Prayer service was held at 7:00 P.M.