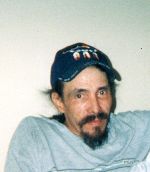 Eddie Morgan Jr. was born to Eddie Morgan Sr. and Jean Benson on June 1, 1962 at The Indian Health Service of Claremore, Oklahoma. Although they were living at Okmulgee, Oklahoma three years later they moved to Downey, California where Eddie went to school until his sophomore year. Again they moved to North Long Beach, California until his senior year. Eddie worked at an Oil Refinery in Long Beach, California for a time. He went to auto mechanics next. In 1990, he met Gina Grant and lived together. In 1990, they moved back to Sisseton, South Dakota where they lived for three years then moved to Okmulgee, Oklahoma where he helped his father with his Motel business and at the same time he worked at Texaco as a mechanic until he suffered a heart attack. They were united in marriage in 1994. Eddie and Gina and family moved back to Sisseton, South Dakota in 2000 where he made his home. He enjoyed fishing, hunting and watching his college teams play (Oklahoma Sooners) and spending time with his grandchildren.