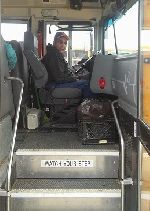 Rex grew up in the Peever area with his grandparents and attended and graduated from The Peever High School.
After high school he joined the United States Air Force in 1962 and was Honorably discharged in 1968.
Rex moved to Minneapolis to attend the Minneapolis Business College for Accounting. While there he met the love of his life Inez Diane Marks and they were married on June 23, 1966 at the Buffalo Lake Presbyterian Church where he became a member.

In 1971, Inez’s mother got sick and they moved home to Sisseton to help take care of her mother and younger siblings. They remained in Sisseton and made their home.

He worked for Brown Construction for many years.
He attended SWCC for a short time.

Rex started driving bus for Tiospa Zina Tribal School in the fall of 1996 until Sept. of 2015 and started subbing until May 2017. His job at Tiospa Zina was his favorite, he loved the kids and his coworkers. His favorite saying was “it’s for the kids”!!

Due to continuing health problems he stayed home to recover and his goal was to get better and return to driving bus.

His pastime consisted of watching sports of any kind, but most of all he loved the Minnesota Vikings.

He liked to play bingo, go visit family and friends.

He will forever be remembered for his humor. Rex will be so very dearly missed by his family and friends!

An all night wake will be held on Tuesday, November 6th beginning at 7:30 P.M. at The Buffalo Lake District Center.